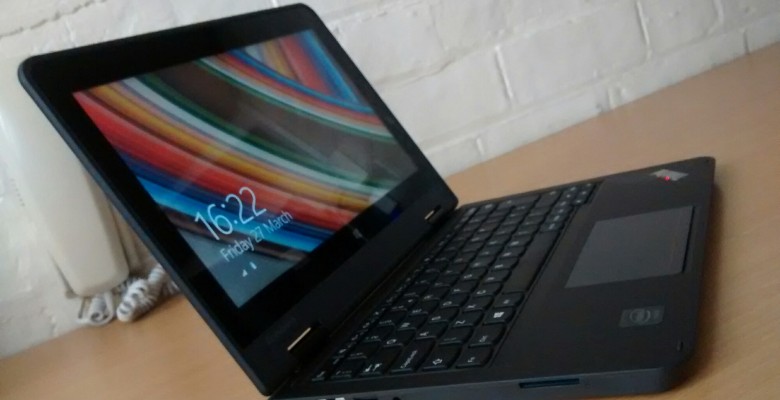 Last week I was on an installation job where I was installing a Microsoft server 2012 R2 along with 25 Lenovo Yoga 11’s. Prior to the school buying these Yoga 11’s I was a bit unsure if the 11″ screen would be big enough.

Once I opened up one of the boxes and got my hands on one I saw that the screen was a good size and should be perfect for the schools needs. They seemed very hard wearing and sturdy. Recently I’ve worked with other Lenovo laptops that weren’t very good quality and the mouse on them was awful. The Yoga 11 build quality was so much better and I had no issues with the mouse. I found the touch screen very accurate and I kept catching my self using it rather than the mouse.

These laptops came shipped with Windows 8.1 professional but I still rebuilt them as I was also installing a server. The Lenovo website was very useful as it had a download which included all the drivers that were needed. This is a very rare thing from manufacturers and saved me a lot of time as usually I’m searching around for that one driver that’s not been installed.

A thing I liked about these laptops is that the screen flips all the way round so the laptop changes to an almost tablet like form.

The spec of the laptops aren’t the best in the world but I was impressed with the performance of the celeron processor.

Overall I thought these were great value for money and would definitely recommend them to anyone. They retail at just under £400 so aren’t the cheapest option on the market. I liked them and actually surprised my self with using the touch screen along with the keyboard and mouse.

Here’s a few more pictures of the Yoga 11